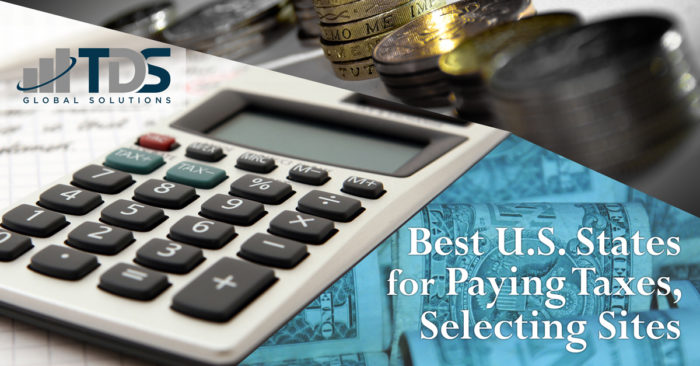 WHERE can we find the best places in the United States, as a taxpayer or a business doing site selection? Combine the list from Washington DC think tanks Tax Foundation and Wallethub by Evolution Finance, and we get our answer.

For 2019, the best places to pay taxes would be Wyoming and Alaska, as well as Montana and Nevada. And what would be the worst places for paying taxes and selecting sites, according to these two lists? Well, there’s Connecticut and New York, as well as California and New Jersey.

WalletHub, for its part, looked at these four different types of taxation:

So what makes one state attractive for taxpayers and site selectors? The common factor seems to be the absence of one or more of the major taxes. And this is either the corporate income tax, the individual income tax, or the sales tax.

Although each state levies a property tax or an unemployment insurance tax, several states do not levy any major tax. Wyoming, Nevada, and South Dakota have no corporate or individual income tax, though Nevada imposes gross receipts taxes.

But even if states still go levying all the major tax types, a state can still rate best for taxpayers. For example, Utah and Indiana levy all of the major taxes, but do so with low rates on broad bases.

According to Wallethub, gas taxes also play a role. Alaska pays the cheapest per gallon, followed by Missouri, Mississippi, New Mexico, and Arizona.

The low-ranking states “tend to have a number of afflictions in common: complex, nonneutral taxes with comparatively high rates.”

For example, New Jersey has some of the highest property tax burdens, and has the second highest corporate income tax. Also, it levies an inheritance tax and maintains some of the worst-structured individual income taxes, Tax Foundation notes.

And being a homeowner in New Jersey isn’t cheap at all, Wallethub adds. In fact, NJ residents have seen the highest real-estate or property taxes, like those in Illinois, Connecticut, and Wisconsin.

Generally, businesses tend to locate where they get the greatest competitive advantage. Therefore, states with the best tax systems will be the most competitive in attracting new businesses.

Moreover, the best states for taxpayers will also be the most effective in generating economic and employment growth. Hence, the places with the most competitive tax systems will reap the benefits of business-friendly tax climates.

While taxes are just one factor in business decision-making, together with a skilled labor pool and access to raw materials or infrastructure, a simple, sensible tax system can positively impact business operations with regard to these resources, Tax Foundation says.

And unlike changes to a state’s healthcare, transportation, or education systems, which can take decades to implement, changes to the tax code can quickly improve a state’s business climate.

In fact, a state’s stiffest competition often comes from other states. Most mass US job relocations are from one state to another rather than to a foreign location. US policymakers may just have misplaced concern on how their states rank in the global competition for jobs and capital.

State lawmakers must be aware of how their states’ business climates match up against their immediate neighbors and to other regional competitor states.

California’s Intel built in 2005 a multibillion chip-making facility in Arizona due to its favorable corporate income tax system. Northrup Grumman chose in 2010 to move its headquarters to Virginia over Maryland, citing the better business tax climate. General Electric and Aetna threatened in 2015 to leave Connecticut due to a planned corporate tax increase; GE actually did.

Since taxes diminish profits, businesses may pass that cost along to either:

Thus, states with lower tax costs will be more attractive to business investments, and more likely to experience economic growth. The best states for taxpayers will also be the most effective in generating economic and employment growth. Hence, the places with the most competitive tax systems will reap the benefits of business-friendly tax climates.